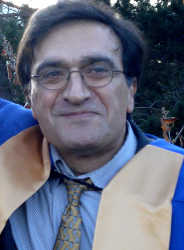 OTTAWA, Ontario — The Canadian Mathematical Society (CMS) is pleased to announce that Nassif Ghoussoub from the University of British Columbia is the recipient of the 2010 CMS David Borwein Distinguished Career Award in recognition of his exceptional, broad, and continued contribution to mathematics. Nassif Ghoussoub will receive his award at the Society’s 2010 Winter Meeting in Vancouver, British Columbia.

The David Borwein Distinguished Career Award was established in 2004 to recognize individuals who have made a sustained outstanding contribution to the advancement of mathematics. David Borwein is a distinguished mathematician and former CMS President. The first award was presented in 2006 and includes a sculpture donated by the Borwein Family.

In announcing the award, Tony Lau, President of the CMS, noted that “Nassif is a world class mathematician who, over his career, has made significant contributions on the domestic and international stage. This award recognizes both his substantive contribution to the mathematics community as well as the excellence of his research.”

“Nassif Ghoussoub is an incredibly talented and determined mathematician who has made a real difference in mathematics,” noted David Brydges, Chair of the CMS Research Committee. “His research has been significantly influential in such areas as partial differential equations, variational methods, critical point theory, infinite dimensional Morse theory, geometrical Banach space theory, and optimization. At the same time he was the driving force behind the creation of the Pacific Institute for the Mathematical Sciences, the Banff International Research Station, and the MITACS Network of Centres of Excellence.”

Dr. Ghoussoub’s seminal 1993 Cambridge Press monograph “Duality and Perturbation Methods in Critical Point Theory” introduced many ideas and methods from his own then-recent work into the calculus of variations, including the far-reaching min-max principle involving duality and a Morse theory “up to epsilon” to deal with borderline variational problems. The influence of this book in the field, and in particular on the recent advances in Hartree-Fock-Dirac theory by Esteban and Sere and related problems in quantum chemistry by Lewin, can hardly be overestimated.

Among the highlights of his one hundred plus papers is his resolution with Gui of De Giorgi’s Conjecture, a long-standing open problem, first with a complete solution in dimension two, followed by major advances in dimensions up to five. This work is described as a “magnificent breakthrough”, involving original ideas with other applications to the study of elliptic partial differential equations.

Dr. Ghoussoub’s work with his students M. Agueh and X. Kang on geometric inequalities is described as a “gem”. Using new ideas on the border between mathematical physics and partial differential equations, they have developed a unified framework for several important geometric inequalities based on a general comparison principle between different states of interacting gases, and discovered a remarkably encompassing energy-entropy duality formula.

Following his solution with his student L. Tzou in 2004 of a 1976 conjecture of Brezis and Ekeland, Dr. Ghoussoub proceeded to develop with his students A. Moameni and R. Zárate Sáis, a new and far-reaching approach to the calculus of variations. His self-dual variational principles exploit algebraic symmetries of newly devised energy functionals to prove existence results for a wide range of partial differential equations not covered by standard Euler-Lagrange theory. A compendium of his work on the subject appeared in a 2008 Springer-Verlag monograph entitled “Selfdual Partial Differential Systems and their Variational Principles. ”.

In the last five years, Dr Ghoussoub and his students, C. Cowan, A. Moradifam, and Y. Guo, and his postdoctoral fellows P. Esposito, and D. Cassani, developed in a series of papers a rigorous mathematical analysis of various partial differential equations proposed by engineers and applied mathematicians for Electrostatic Micro-Electromechanical Systems (MEMS). Combining electronics with miniature-size mechanical devices, these are essential components of the modern technology that is currently driving telecommunications, commercial systems, biomedical engineering, and space exploration. The models provided an extremely rich source of mathematical problems, phenomena and structure, which Dr. Ghoussoub addresses in a book on the subject that was published in 2010 by the American Mathematical Society as a Courant Institute Lecture Notes.

Nassif Ghoussoub obtained his Doctorat d'état in 1979 from the Université Pierre et Marie Curie in Paris, France and is currently a Professor of Mathematics and a Distinguished University Scholar at the University of British Columbia. His academic distinctions include the Coxeter-James Prize (1990), a UBC Killam Senior Research Fellowship (1992), the Jeffrey-Williams Prize (2007), and the UBC Faculty of Science Achievement Award for outstanding service and leadership (2007). He was elected Fellow of the Royal Society of Canada in 1993, and was awarded a 2004 Doctorat Honoris Causa from the Université Paris-Dauphine.

Nassif is currently serving on the Killam committee at the Canada Council for the Arts (2007-2010). He was vice-president of the Canadian Mathematical Society from 1994 to 1996, and editor-in-chief of the Canadian Journal of Mathematics from 1993 to 2002. He was the founding Director of the Pacific Institute for the Mathematical Sciences (PIMS) for 1996-2003, a co-founder of the MITACS Network of Centres of Excellence (Mathematics of Information Technology & Complex Systems) and a member of its Board of Directors (1998-2003). He currently serves on the Board of Governors of the University of British Columbia and is the scientific director of the Banff International Research Station (BIRS) that he founded in 2003.

About the Canadian Mathematical Society (CMS)

The CMS is the main national organization whose goal is to promote and advance the discovery, learning, and application of mathematics. The Society's activities cover the whole spectrum of mathematics including: scientific meetings, research publications, and the promotion of excellence in mathematics education at all levels. The CMS annually sponsors mathematics awards and prizes that recognize outstanding achievements.